Aquaporin-4 (AQP4) is the molecular target of the immune response in neuromyelitis optica (NMO) that leads to severe structural damage in the central nervous system (CNS) and in the retina. Conversely, AQP4 might be upregulated in astrocytes as a compensatory event in multiple sclerosis. Thus, the functional relevance of AQP4 in neuroinflammation needs to be defined. Here, we tested the role of AQP4 in the retina in MOG(35-55)-induced experimental autoimmune encephalomyelitis (EAE) using optical coherence tomography (OCT), OCT angiography, immunohistology, flow cytometry, and gene expression analysis in wild-type and Aqp4-/- mice. No direct infiltrates of inflammatory cells were detected in the retina. Yet, early retinal expression of TNF and Iba1 suggested that the retina participated in the inflammatory response during EAE in a similar way in wild-type and Aqp4-/- mice. While wild-type mice rapidly cleared retinal swelling, Aqp4-/- animals exhibited a sustainedly increased retinal thickness associated with retinal hyperperfusion, albumin extravasation, and upregulation of GFAP as a hallmark of retinal scarring at later stages of EAE. Eventually, the loss of retinal ganglion cells was higher in Aqp4-/- mice than in wild-type mice. Therefore, AQP4 expression might be critical for retinal Müller cells to clear the interstitial space from excess vasogenic edema and prevent maladaptive scarring in the retina during remote inflammatory processes of the CNS. KEY MESSAGES : Genetic ablation of AQP4 leads to a functional derangement of the retinal gliovascular unit with retinal hyperperfusion during autoimmune CNS inflammation. Genetic ablation of AQP4 results in a structural impairment of the blood retina barrier with extravasation of albumin during autoimmune CNS inflammation. Eventually, the lack of AQP4 in the retina during an inflammatory event prompts the exaggerated upregulation of GFAP as a hallmark of scarring as well as loss of retinal ganglion cells. 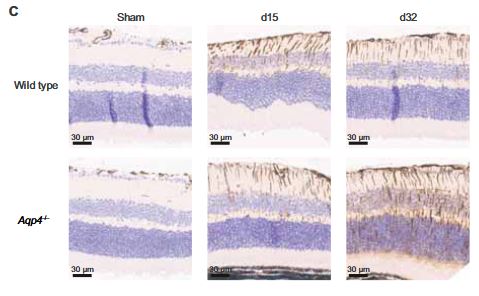