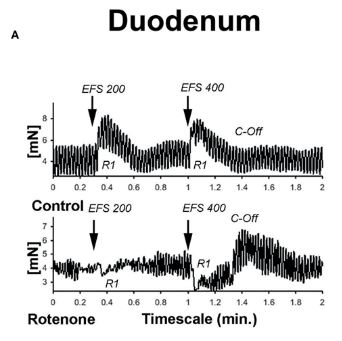 Parkinson's disease (PD) is known to involve the peripheral nervous system (PNS) and the enteric nervous system (ENS). Functional changes in PNS and ENS appear early in the course of the disease and are responsible for some of the non-motor symptoms observed in PD patients like constipation, that can precede the appearance of motor symptoms by years. Here we analyzed the effect of the pesticide rotenone, a mitochondrial Complex I inhibitor, on the function and neuronal composition of the ENS by measuring intestinal contractility in a tissue bath and by analyzing related protein expression. Our results show that rotenone changes the normal physiological response of the intestine to carbachol, dopamine and electric field stimulation (EFS). Changes in the reaction to EFS seem to be related to the reduction in the cholinergic input but also related to the noradrenergic input, as suggested by the non-adrenergic non-cholinergic (NANC) reaction to the EFS in rotenone-exposed mice. The magnitude and direction of these alterations varies between intestinal regions and exposure times and is associated with an early up-regulation of dopaminergic, cholinergic and adrenergic receptors and an irregular reduction in the amount of enteric neurons in rotenone-exposed mice. The early appearance of these alterations, that start occurring before the substantia nigra is affected in this mouse model, suggests that these alterations could be also observed in patients before the onset of motor symptoms and makes them ideal potential candidates to be used as radiological markers for the detection of Parkinson's disease in its early stages.