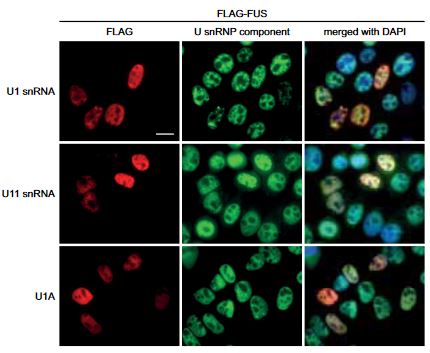 Liquid–liquid phase separation (LLPS) of proteins and RNAs has emerged as the driving force underlying the formation of membrane-less organelles. Such biomolecular condensates have various biological functions and have been linked to disease. The protein Fused in Sarcoma (FUS) undergoes LLPS and mutations in FUS have been causally linked to the motor neuron disease Amyotrophic Lateral Sclerosis (ALS-FUS). LLPS followed by aggregation of cytoplasmic FUS has been proposed to be a crucial disease mechanism. However, it is currently unclear how LLPS impacts the behaviour of FUS in cells, e.g. its interactome. Hence, we developed a method allowing for the purification of LLPS FUS-containing droplets from cell lysates. We observe substantial alterations in the interactome, depending on its biophysical state. While non-LLPS FUS interacts mainly with factors involved in pre-mRNA processing, LLPS FUS predominantly binds to proteins involved in chromatin remodelling and DNA damage repair. Interestingly, also mitochondrial factors are strongly enriched with LLPS FUS, providing a potential explanation for the observed changes in mitochondrial gene expression in mouse models of ALS-FUS. In summary, we present a methodology to investigate the interactomes of phase separating proteins and provide evidence that LLPS shapes the FUS interactome with implications for function and disease.