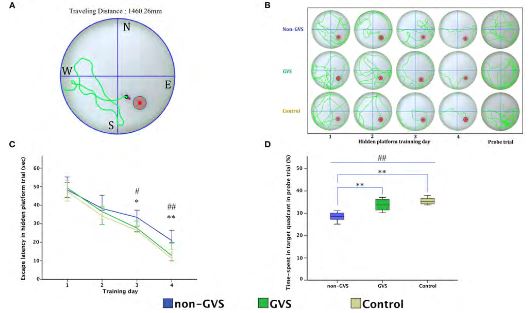 Objectives: To investigate the deficits of spatial memory and navigation from unilateral
vestibular deafferentation (UVD) and to determine the efficacy of galvanic vestibular
stimulation (GVS) for recovery from these deficits using a mouse model of unilateral
labyrinthectomy (UL).
Methods: Thirty-six male C57BL/6 mice were allocated into three groups that comprise
a control group and two experimental groups, UVD with (GVS group) and without GVS
intervention (non-GVS group). In the experimental groups, we assessed the locomotor
and cognitive behavioral function before (baseline) and 3, 7, and 14 days after surgical
UL, using the open field (OF), Y maze, and Morris water maze (MWM) tests. In the GVS
group, the stimulations were applied for 30 min daily from postoperative day (POD) 0–4
via the electrodes inserted subcutaneously close to both bony labyrinths.
Results: Locomotion and spatial cognition were significantly impaired in the mice with
UVD non-GVS group compared to the control group. GVS significantly accelerated
recovery of locomotion compared to the control and non-GVS groups on PODs 3
(p < 0.001) and 7 (p < 0.05, Kruskal–Wallis and Mann–Whitney U tests) in the OF and
Y maze tests. The mice in the GVS group were better in spatial working memory assessed
with spontaneous alternation performance and spatial reference memory assessed with
place recognition during the Y maze test than those in the non-GVS group on POD 3
(p < 0.001). In addition, the recovery of long-term spatial navigation deficits during the
MWM, as indicated by the escape latency and the probe trial, was significantly better in
the GVS group than in the non-GVS group 2 weeks after UVD (p < 0.01).
Conclusions: UVD impairs spatial memory, navigation, and motor coordination. GVS
accelerated recoveries in short- and long-term spatial memory and navigation, as well
as locomotor function in mice with UVD, and may be applied to the patients with acute
unilateral vestibular failure