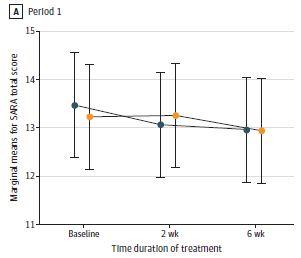 Objective To investigate the efficacy, safety, and tolerability of the modified essential amino acid acetyl-DL-leucine in treating patients who have cerebellar ataxia.

Design, Setting, and Participants The Acetyl-DL-leucine on Cerebellar Ataxia (ALCAT) trial was an investigator-initiated, multicenter, double-blind, randomized, placebo-controlled, clinical crossover trial. The study was conducted at 7 university hospitals in Germany and Austria between January 25, 2016, and February 17, 2017. Patients were aged at least 18 years and diagnosed with cerebellar ataxia of hereditary (suspected or genetically confirmed) or nonhereditary or unknown type presenting with a total score of at least 3 points on the Scale for the Assessment and Rating of Ataxia (SARA). Statistical analysis was performed from April 2018 to June 2018 and January 2020 to March 2020.

Interventions Patients were randomly assigned (1:1) to receive acetyl-DL-leucine orally (5 g per day after 2 weeks up-titration) followed by a matched placebo, each for 6 weeks, separated by a 4-week washout, or vice versa. The randomization was done via a web-based, permuted block-wise randomization list (block size, 2) that was stratified by disease subtype (hereditary vs nonhereditary or unknown) and site.

Main Outcomes and Measures Primary efficacy outcome was the absolute change of SARA total score from (period-dependent) baseline to week 6.

Conclusions and Relevance In this large multicenter, double-blind, randomized, placebo-controlled clinical crossover trial, acetyl-DL-leucine in the investigated dosage and treatment duration was not superior to placebo for the symptomatic treatment of certain types of ataxia. The drug was well tolerated; and ALCAT yielded valuable information about the duration of treatment periods and the role of placebo response in cerebellar ataxia. These findings suggest that further symptom-oriented trials are needed for evaluating the long-term effects of acetyl-DL-leucine for well-defined subgroups of cerebellar ataxia.