The RNA-binding protein FUS is chaperoned and imported into the nucleus by a network of import receptors. 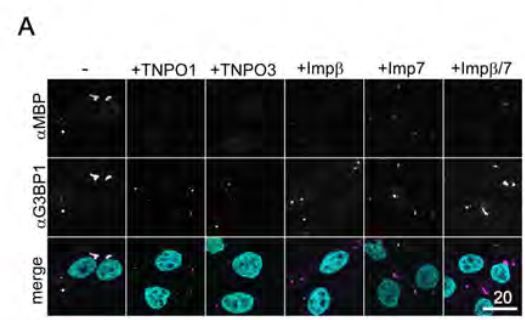 Fused in Sarcoma (FUS) is a predominantly nuclear RNA-binding protein with key functions in RNA processing and DNA damage repair. Defects in nuclear import of FUS have been linked to severe neurodegenerative diseases, hence it is of great interest to understand this process and how it is dysregulated in disease. Transportin-1 (TNPO1) and the closely related Transportin-2 (TNPO2) have been identified as major nuclear import receptors of FUS. They bind to the C-terminal nuclear localization signal of FUS and mediate the protein’s nuclear import, and at the same time also suppress aberrant phase transitions of FUS in the cytoplasm. Whether FUS can utilize other nuclear transport receptors for the purpose of import and chaperoning has not been examined so far. Here we show that FUS directly binds to different import receptors in vitro. FUS formed stable complexes not only with TNPO1, but also with TNPO3, importin β, importin 7, or the importin β/7 heterodimer. Binding of these alternative import receptors required arginine residues within FUS-RG/RGG motifs, and was weakened by arginine methylation. Interaction with these importins suppressed FUS phase separation and reduced its sequestration into stress granules. In a permeabilized cell system, we further showed that TNPO3 had the capacity to import FUS into the nucleus, albeit with lower efficiency than TNPO1. Our data suggest that aggregation-prone RNA-binding proteins like FUS may utilize a network of importins for chaperoning and import, similar to histones and ribosomal proteins.