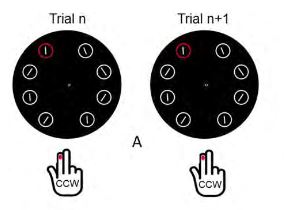 Background Recent evidence suggests that the dorsal medial frontal cortex (dMFC) may make an important contribution to perceptual decision-making, and not only to motor control.

Objective/hypothesis By fitting psychometric functions to behavioural data after TMS we tested whether the dMFC is critical specifically for the precision and/or bias of perceptual judgements. Additionally we aimed to disentangle potential roles of the dMFC in dealing with perceptual versus response switching.

Methods A subjective visual vertical task (SVV) was used in which participants weight visual (and other, e.g., vestibular) information to establish whether a line is oriented vertically. To ensure a high perceptual demand (putatively necessary to demonstrate a dMFC involvement) SVV lines were presented inside pop-out targets within a visual search array. Distinct features of perceptual performance were analysed before as compared to following theta-burst TMS stimulation of the dMFC, a control site, or no stimulation, in three groups, each of 20 healthy participants.

Conclusion These findings point to a causal role of the dMFC in establishing the precision of perceptual decision making, demonstrably dissociable from an additional role in motor control in attentionally demanding contexts.