Valence and State-Dependent Population Coding in Dopaminergic Neurons in the Fly Mushroom Body. 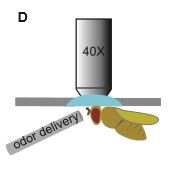 Neuromodulation permits flexibility of synapses, neural circuits, and ultimately behavior. One neuromodulator, dopamine, has been studied extensively in its role as a reward signal during learning and memory across animal species. Newer evidence suggests that dopaminergic neurons (DANs) can modulate sensory perception acutely, thereby allowing an animal to adapt its behavior and decision making to its internal and behavioral state. In addition, some data indicate that DANs are not homogeneous but rather convey different types of information as a heterogeneous population. We have investigated DAN population activity and how it could encode relevant information about sensory stimuli and state by taking advantage of the confined anatomy of DANs innervating the mushroom body (MB) of the fly Drosophila melanogaster. Using in vivo calcium imaging and a custom 3D image registration method, we found that the activity of the population of MB DANs encodes innate valence information of an odor or taste as well as the physiological state of the animal. Furthermore, DAN population activity is strongly correlated with movement, consistent with a role of dopamine in conveying behavioral state to the MB. Altogether, our data and analysis suggest that DAN population activities encode innate odor and taste valence, movement, and physiological state in a MB-compartment-specific manner. We propose that dopamine shapes innate perception through combinatorial population coding of sensory valence, physiological, and behavioral context.