Connexins: Key Players in the Control of Vascular Plasticity and Function. 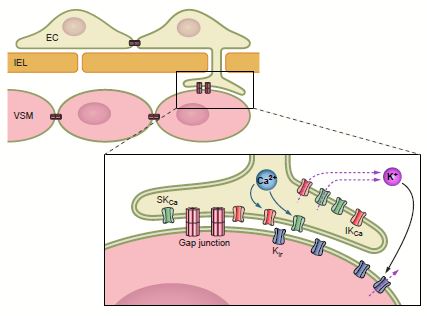 Of the 21 members of the connexin family, 4 (Cx37, Cx40, Cx43, and Cx45) are expressed in the endothelium and/or smooth muscle of intact blood vessels to a variable and dynamically regulated degree. Full-length connexins oligomerize and form channel structures connecting the cytosol of adjacent cells (gap junctions) or the cytosol with the extracellular space (hemichannels). The different connexins vary mainly with regard to length and sequence of their cytosolic COOH-terminal tails. These COOH-terminal parts, which in the case of Cx43 are also translated as independent short isoforms, are involved in various cellular signaling cascades and regulate cell functions. This review focuses on channel-dependent and -independent effects of connexins in vascular cells. Channels play an essential role in coordinating and synchronizing endothelial and smooth muscle activity and in their interplay, in the control of vasomotor actions of blood vessels including endothelial cell reactivity to agonist stimulation, nitric oxide-dependent dilation, and endothelial-derived hyperpolarizing factor-type responses. Further channel-dependent and -independent roles of connexins in blood vessel function range from basic processes of vascular remodeling and angiogenesis to vascular permeability and interactions with leukocytes with the vessel wall. Together, these connexin functions constitute an often underestimated basis for the enormous plasticity of vascular morphology and function enabling the required dynamic adaptation of the vascular system to varying tissue demands.