The phenotype associated with variants in TANGO2 may be explained by a dual role of the protein in ER-to-Golgi transport and at the mitochondria. 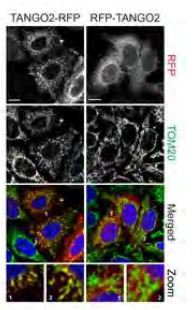 TANGO2 variants result in a complex disease phenotype consisting of recurrent crisis‐induced rhabdomyolysis, encephalopathy, seizures, lactic acidosis, hypoglycemia, and cardiac arrhythmias. Although first described in a fruit fly model as a protein necessary for some aspect of Golgi function and organization, its role in the cell at a fundamental level has not been addressed. Such studies are necessary to better counsel families regarding treatment options and nutrition management to mitigate the metabolic aspects of the disease. The few studies performed to address the pathway(s) in which TANGO2 functions have led to enigmatic results, with some suggesting defects in membrane traffic while others suggest unknown mitochondrial defects. Here, we have performed a robust membrane trafficking assay on fibroblasts derived from three different individuals harboring TANGO2 variants and show that there is a significant delay in the movement of cargo between the endoplasmic reticulum and the Golgi. Importantly, this delay was attributed to a defect in TANGO2 function. We further show that a portion of TANGO2 protein localizes to the mitochondria through a necessary but not sufficient stretch of amino acids at the amino terminus of the protein. Fibroblasts from affected individuals also displayed changes in mitochondrial morphology. We conclude that TANGO2 functions in both membrane trafficking and in some as yet undetermined role in mitochondria physiology. The phenotype of affected individuals can be partially explained by this dual involvement of the protein.