Congenic expression of poly-GA but not poly-PR in mice triggers selective neuron loss and interferon responses found in C9orf72 ALS. 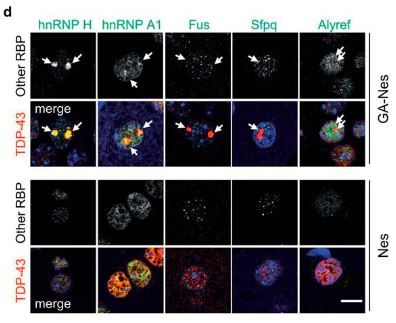 Expansion of a (G4C2)n repeat in C9orf72 causes amyotrophic lateral sclerosis (ALS) and frontotemporal dementia (FTD), but the link of the five repeat-encoded dipeptide repeat (DPR) proteins to neuroinflammation, TDP-43 pathology, and neurodegeneration is unclear. Poly-PR is most toxic in vitro, but poly-GA is far more abundant in patients. To directly compare these in vivo, we created congenic poly-GA and poly-PR mice. 40% of poly-PR mice were affected with ataxia and seizures, requiring euthanasia by 6 weeks of age. The remaining poly-PR mice were asymptomatic at 14 months of age, likely due to an 80% reduction of the transgene mRNA in this subgroup. In contrast, all poly-GA mice showed selective neuron loss, inflammation, as well as muscle denervation and wasting requiring euthanasia before 7 weeks of age. In-depth analysis of peripheral organs and blood samples suggests that peripheral organ failure does not drive these phenotypes. Although transgene mRNA levels were similar between poly-GA and affected poly-PR mice, poly-GA aggregated far more abundantly than poly-PR in the CNS and was also found in skeletal muscle. In addition, TDP-43 and other disease-linked RNA-binding proteins co-aggregated in rare nuclear inclusions in the hippocampus and frontal cortex only in poly-GA mice. Transcriptome analysis revealed activation of an interferon-responsive pro-inflammatory microglial signature in end-stage poly-GA but not poly-PR mice. This signature was also found in all ALS patients and enriched in C9orf72 cases. In summary, our rigorous comparison of poly-GA and poly-PR toxicity in vivo indicates that poly-GA, but not poly-PR at the same mRNA expression level, promotes interferon responses in C9orf72 disease and contributes to TDP-43 abnormalities and neuron loss selectively in disease-relevant regions.