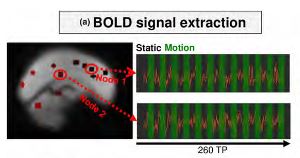 Introduction Functional dizziness comprises a class of dizziness disorders, including phobic postural vertigo (PPV), that cause vestibular symptoms in the absence of a structural organic origin. For this reason, functional brain mechanisms have been implicated in these disorders.

Conclusion These results suggest that the altered visual motion processing seen in PPV patients may arise from a modified state of sensory and cerebellar network connectivity.