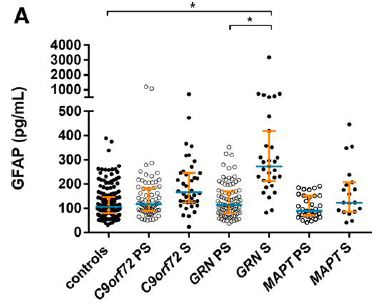 BACKGROUND: There are few validated fluid biomarkers in frontotemporal dementia (FTD). Glial fibrillary acidic protein (GFAP) is a measure of astrogliosis, a known pathological process of FTD, but has yet to be explored as potential biomarker.

CONCLUSIONS: Raised GFAP concentrations appear to be unique to GRN-related FTD, with levels potentially increasing just prior to symptom onset, suggesting that GFAP may be an important marker of proximity to onset, and helpful for forthcoming therapeutic prevention trials.