Dynamic whole-brain metabolic connectivity during vestibular compensation in the rat. 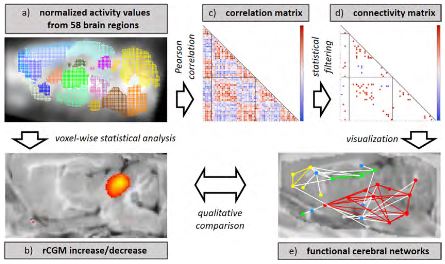 Unilateral damage to the inner ear results in an acute vestibular syndrome, which is compensated within days to weeks due to adaptive cerebral plasticity. This process, called central vestibular compensation (VC), involves a wide range of functional and structural mechanisms at the cellular and network level. The short-term dynamics of whole-brain functional network recruitment and recalibration during VC has not been depicted in vivo. The purpose of this study was to investigate the interplay of separate and distinct brain regions and in vivo networks in the course of VC by sequential [18F]-FDG-PET-based statistical and graph theoretical analysis with the aim of revealing the metabolic connectome before and 1, 3, 7, and 15 days post unilateral labyrinthectomy (UL) in the rat. Temporal changes in metabolic brain connectivity were determined by Pearson's correlation (|r| > 0.5, p < 0.001) of regional cerebral glucose metabolism (rCGM) in 57 segmented brain regions. Metabolic connectivity analysis was compared to univariate voxel-wise statistical analysis of rCGM over time and to behavioral scores of static and dynamic sensorimotor recovery. Univariate statistical analysis revealed an ipsilesional relative rCGM decrease (compared to baseline) and a contralesional rCGM increase in vestibular and limbic networks and an increase in bilateral cerebellar and sensorimotor networks. Quantitative analysis of the metabolic connections showed a maximal increase from baseline to day 3 post UL (interhemispheric: 2-fold, ipsilesional: 3-fold, contralesional: 12-fold) and a gradual decline until day 15 post UL, which paralleled the dynamics of vestibular symptoms. In graph theoretical analysis, an increase in connectivity occurred especially within brain regions associated with brainstem-cerebellar and thalamocortical vestibular networks and cortical sensorimotor networks. At the symptom peak (day 3 post UL), brain networks were found to be organized in large ensembles of distinct and highly connected hubs of brain regions, which separated again with progressing VC. Thus, we found rapid changes in network organization at the subcortical and cortical level and in both hemispheres, which may indicate an initial functional substitution of vestibular loss and subsequent recalibration and reorganization of sensorimotor networks during VC.