T1-Weighted Intensity Increase After a Single Administration of a Linear Gadolinium-Based Contrast Agent in Multiple Sclerosis. 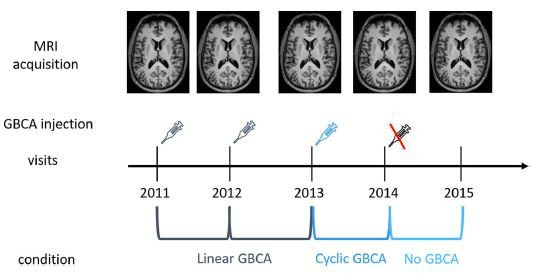 Methods A total of 3233 T1w images (unenhanced with respect to the same scanning session) of 881 MS patients were retrospectively analyzed. After spatial normalization and intensity scaling using a sphere within the pons, differences of all pairs of subsequent scans were calculated and attributed to either linear (n = 2718) or cyclic (n = 385) or no GBCA (n = 130) according to the first scan. Regional analyses were performed, focusing on the dentate nucleus, and whole brain analyses. By 1‑sample t‑tests, signal intensity increases within conditions were searched for; conditions were compared by 2‑sample t‑tests. Furthermore, recent hypotheses on the reversibility of GBCA deposition were tested.

Results In the dentate nucleus, a significant increase was observed only after administration of linear GBCA even after a single GBCA administration. This increase differed significantly (p < 0.001) from the other conditions (cyclic and no GBCA). Whole brain analyses revealed T1w signal increases only after administration of linear GBCA within two regions, the dentate nucleus and globus pallidus. Additional analyses did not indicate any decline of Gd deposition in the brain.

Conclusion The data point towards Gd deposition in the brain after administration of linear GBCA even after a single administration.