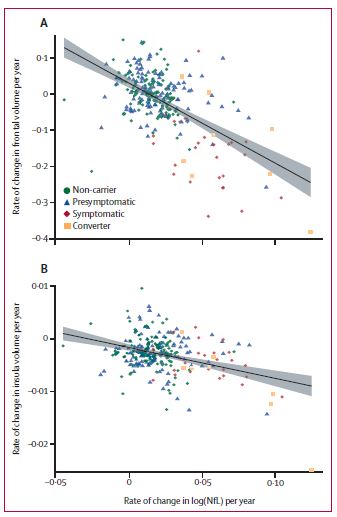 Methods We recruited participants from 14 centres collaborating in the Genetic Frontotemporal Dementia Initiative (GENFI), which is a multicentre cohort study of families with genetic frontotemporal dementia done across Europe and Canada. Eligible participants (aged ≥18 years) either had frontotemporal dementia due to a pathogenic mutation in GRN, C9orf72, or MAPT (symptomatic mutation carriers) or were healthy at-risk first-degree relatives (either presymptomatic mutation carriers or non-carriers), and had at least two serum samples with a time interval of 6 months or more. Participants were excluded if they had neurological comorbidities that were likely to affect NfL, including cerebrovascular events. We measured NfL longitudinally in serum samples collected between June 8, 2012, and Dec 8, 2017, through follow-up visits annually or every 2 years, which also included MRI and neuropsychological assessments. Using mixed-effects models, we analysed NfL changes over time and correlated them with longitudinal imaging and clinical parameters, controlling for age, sex, and study site. The primary outcome was the course of NfL over time in the various stages of genetic frontotemporal dementia.

Interpretation Our findings show the value of blood NfL as a disease progression biomarker in genetic frontotemporal dementia and suggest that longitudinal NfL measurements could identify mutation carriers approaching symptom onset and capture rates of brain atrophy. The characterisation of NfL over the course of disease provides valuable information for its use as a treatment effect marker.