Influence of Genetic Variation in PDE3A on Endothelial Function and Stroke. 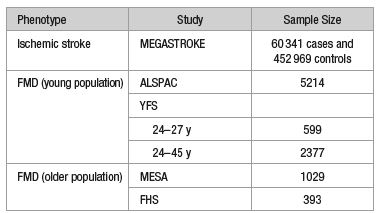 We aimed to characterize the genetics of endothelial function and how this influences risk for cardiovascular diseases such as ischemic stroke. We integrated genetic data from a study of ultrasound flow-mediated dilatation of brachial artery in adolescents from ALSPAC (Avon Longitudinal Study of Parents and Children; n=5214) with a study of ischemic stroke (MEGASTROKE: n=60 341 cases and 452 969 controls) to identify variants that confer risk of ischemic stroke through altered endothelial function. We identified a variant in PDE3A (Phosphodiesterase 3A), encoding phosphodiesterase 3A, which was associated with flow-mediated dilatation in adolescents (9-12 years of age; β[SE], 0.38 [0.070]; P=3.8×10-8) and confers risk of ischemic stroke (odds ratio, 1.04 [95% CI, 1.02-1.06]; P=5.2×10-6). Bayesian colocalization analyses showed the same underlying variation is likely to lead to both associations (posterior probability, 97%). The same variant was associated with flow-mediated dilatation in a second study in young adults (age, 24-27 years; β[SE], 0.47 [0.23]; P=0.047) but not in older adults (β[SE], -0.012 [0.13]; P=0.89). We conclude that a genetic variant in PDE3A influences endothelial function in early life and leads to increased risk of ischemic stroke. Subtle, measurable changes to the vasculature that are influenced by genetics also influence risk of ischemic stroke.