Subtype Specificity of Genetic Loci Associated With Stroke in 16 664 Cases and 32 792 Controls. 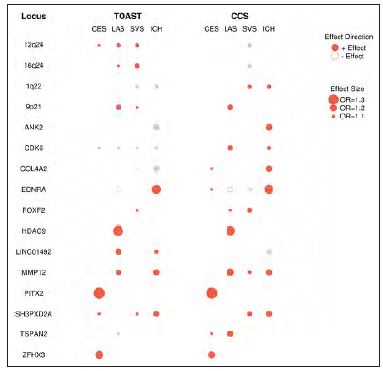 RESULTS: Sixteen loci were considered for analysis. Seven loci influenced both hemorrhagic and ischemic stroke, 3 of which influenced ischemic and hemorrhagic subtypes under both TOAST and causative classification of stroke. Under causative classification of stroke, 4 loci influenced both small vessel stroke and intracerebral hemorrhage. An EDNRA locus demonstrated opposing effects on ischemic and hemorrhagic stroke. No loci were predicted to influence all stroke subtypes in the same direction, and only one locus (12q24) was predicted to influence all ischemic stroke subtypes.