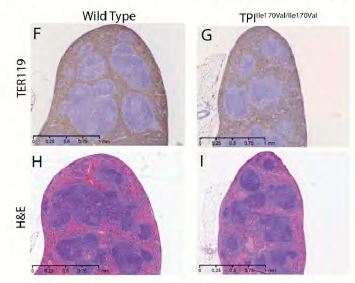 Triosephosphate isomerase (TPI) deficiency is a fatal genetic disorder characterized by haemolytic anaemia and neurological dysfunction. Although the enzyme defect in TPI was discovered in the 1960s, the exact etiology of the disease is still debated. Some aspects indicate the disease could be caused by insufficient enzyme activity, whereas other observations indicate it could be a protein misfolding disease with tissue‐specific differences in TPI activity. We generated a mouse model in which exchange of a conserved catalytic amino acid residue (isoleucine to valine, Ile170Val) reduces TPI specific activity without affecting the stability of the protein dimer. TPIIle170Val/Ile170Val mice exhibit an ~85% reduction in TPI activity consistently across all examined tissues, which is a stronger average activity decline than observed in patients or symptomatic mouse models that carry structural defect mutant alleles. While monitoring protein expression levels revealed no evidence for protein instability, metabolite quantification indicated that glycolysis is affected by the active site mutation. TPIIle170Val/Ile170Val mice develop normally and show none of the disease symptoms associated with TPI deficiency. Therefore, without the stability defect that penetrates in a tissue‐specific manner, a strong decline in TPI catalytic activity is not sufficient to explain the pathological onset of TPI deficiency.