Mouse brain proteomics establishes MDGA1 and CACHD1 as in vivo substrates of the Alzheimer protease BACE1. 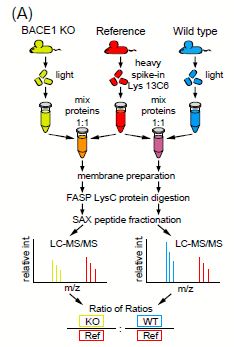 The protease beta-site APP cleaving enzyme 1 (BACE1) has fundamental functions in the nervous system. Its inhibition is a major therapeutic approach in Alzheimer's disease, because BACE1 cleaves the amyloid precursor protein (APP), thereby catalyzing the first step in the generation of the pathogenic amyloid beta (Aβ) peptide. Yet, BACE1 cleaves numerous additional membrane proteins besides APP. Most of these substrates have been identified in vitro, but only few were further validated or characterized in vivo. To identify BACE1 substrates with in vivo relevance, we used isotope label-based quantitative proteomics of wild type and BACE1-deficient (BACE1 KO) mouse brains. This approach identified known BACE1 substrates, including Close homolog of L1 and contactin-2, which were found to be enriched in the membrane fraction of BACE1 KO brains. VWFA and cache domain-containing protein 1 (CACHD)1 and MAM domain-containing glycosylphosphatidylinositol anchor protein 1 (MDGA1), which have functions in synaptic transmission, were identified and validated as new BACE1 substrates in vivo by immunoblots using primary neurons and mouse brains. Inhibition or deletion of BACE1 from primary neurons resulted in a pronounced inhibition of substrate cleavage and a concomitant increase in full-length protein levels of CACHD1 and MDGA1. The BACE1 cleavage site in both proteins was determined to be located within the juxtamembrane domain. In summary, this study identifies and validates CACHD1 and MDGA1 as novel in vivo substrates for BACE1, suggesting that cleavage of both proteins may contribute to the numerous functions of BACE1 in the nervous system.