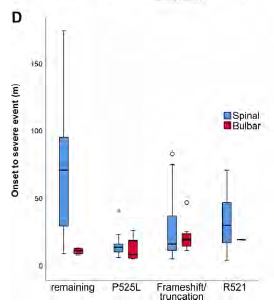 OBJECTIVE: Mutations in Fused in Sarcoma (FUS or TLS) are the fourth most prevalent in Western European familial amyotrophic lateral sclerosis (ALS) populations and have been associated with causing both early and very late disease onset. FUS aggregation, DNA repair deficiency, and genomic instability are contributors to the pathophysiology of FUS-ALS, but their clinical significance per se and their influence on the clinical variability have yet to be sufficiently investigated. The aim of this study was to analyze genotype-phenotype correlations and malignancy rates in a newly compiled FUS-ALS cohort.

METHODS: We cross-sectionally reviewed FUS-ALS patient histories in a multicenter cohort with 36 novel cases and did a meta-analysis of published FUS-ALS cases reporting the largest genotype-phenotype correlation of FUS-ALS.

RESULTS: The age of onset (median 39 years, range 11-80) was positively correlated with the disease duration. C-terminal domain mutations were found in 90%. Among all, P525L and truncating/ frameshift mutations most frequently caused juvenile onset, rapid disease progression, and atypical ALS often associated with negative family history while the R521 mutation site was associated with late disease onset and pure spinal phenotype. Malignancies were found in one of 40 patients.

INTERPRETATION: We report the largest genotype-phenotype correlation of FUS-ALS, which enables a careful prediction of the clinical course in newly diagnosed patients. In this cohort, FUS-ALS patients did not have an increased risk for malignant diseases.