Role of the COP9 Signalosome (CSN) in Cardiovascular Diseases. 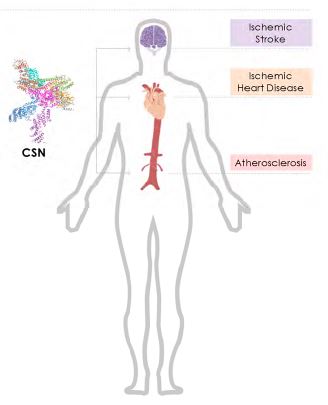 The constitutive photomorphogenesis 9 (COP9) signalosome (CSN) is an evolutionarily conserved multi-protein complex, consisting of eight subunits termed CSN1-CSN8. The main biochemical function of the CSN is the control of protein degradation via the ubiquitin-proteasome-system through regulation of cullin-RING E3-ligase (CRL) activity by deNEDDylation of cullins, but the CSN also serves as a docking platform for signaling proteins. The catalytic deNEDDylase (isopeptidase) activity of the complex is executed by CSN5, but only efficiently occurs in the three-dimensional architectural context of the complex. Due to its positioning in a central cellular pathway connected to cell responses such as cell-cycle, proliferation, and signaling, the CSN has been implicated in several human diseases, with most evidence available for a role in cancer. However, emerging evidence also suggests that the CSN is involved in inflammation and cardiovascular diseases. This is both due to its role in controlling CRLs, regulating components of key inflammatory pathways such as nuclear factor kappa-light-chain-enhancer of activated B cells (NF-κB), and complex-independent interactions of subunits such as CSN5 with inflammatory proteins. In this case, we summarize and discuss studies suggesting that the CSN may have a key role in cardiovascular diseases such as atherosclerosis and heart failure. We discuss the implicated molecular mechanisms ranging from inflammatory NF-κB signaling to proteotoxicity and necrosis, covering disease-relevant cell types such as myeloid and endothelial cells or cardiomyocytes. While the CSN is considered to be disease-exacerbating in most cancer entities, the cardiovascular studies suggest potent protective activities in the vasculature and heart. The underlying mechanisms and potential therapeutic avenues will be critically discussed.