Which features of subjective cognitive decline are related to amyloid pathology? Findings from the DELCODE study. 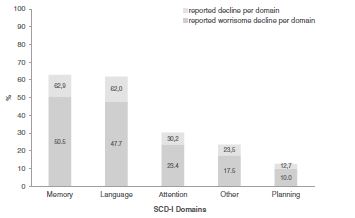 BACKGROUND Subjective cognitive decline (SCD) has been proposed as a pre-MCI at-risk condition of Alzheimer’s disease (AD). Current research is focusing on a refined assessment of specific SCD features associated with increased risk for AD, as proposed in the SCD-plus criteria. We developed a structured interview (SCD-I) for the assessment of these features and tested their relationship with AD biomarkers.

METHODS We analyzed data of 205 cognitively normal participants of the DELCODE study (mean age = 68.9 years; 52% female) with available CSF AD biomarkers (Aß-42, p-Tau181, Aß-42/Tau ratio, total Tau). For each of five cognitive domains (including memory, language, attention, planning, others), a study physician asked participants about the following SCD-plus features: the presence of subjective decline, associated worries, onset of SCD, feeling of worse performance than others of the same age group, and informant confirmation. We compared AD biomarkers of subjects endorsing each of these questions with those who did not, controlling for age. SCD was also quantified by two summary scores: the number of fulfilled SCD-plus features, and the number of domains with experienced decline. Covariate-adjusted linear regression analyses were used to test whether these SCD scores predicted abnormality in AD biomarkers.

RESULTS Lower Aß-42 levels were associated with a reported decline in memory and language abilities, and with the following SCD-plus features: onset of subjective decline within 5 years, confirmation of cognitive decline by an informant, and decline-related worries. Furthermore, both quantitative SCD scores were associated with lower Aß42 and lower Aß42/Tau ratio, but not with total Tau or p-Tau181.

CONCLUSIONS Findings support the usefulness of a criterion-based interview approach to assess and quantify SCD in the context of AD and validate the current SCD-plus features as predictors of AD pathology. While some features seem to be more closely associated with AD biomarkers than others, aggregated scores over several SCD-plus features or SCD domains may be the best predictors of AD pathology.