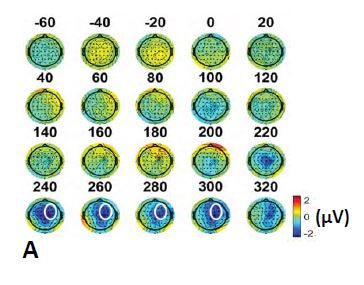 The right frontal eye field (rFEF) is associated with visual perception and eye movements. rFEF is activated during optokinetic nystagmus (OKN), a reflex that moves the eye in response to visual motion (optokinetic stimulation, OKS). It remains unclear whether rFEF plays causal perceptual and/or oculomotor roles during OKS and OKN. To test this, participants viewed a leftward moving visual scene of vertical bars and judged whether a flashed dot was moving. Single pulses of transcranial magnetic stimulation (TMS) were applied to rFEF on half of trials. In half of blocks, to explore oculomotor control, participants performed an optokinetic nystagmus (OKN) in response to the OKS. rFEF TMS, during OKN, made participants more accurate on trials when the dot was still, and slowed eye movements. In separate blocks, participants fixated during OKS. This not only controlled for eye movements but also allows using EEG to explore the FEF's role in visual motion discrimination. Here, by contrast, leftward dot motion discrimination was impaired, associated with a disruption of the frontal-posterior balance in alpha-band oscillations. None of these effects occurred in a control site (M1) experiment. These results demonstrate multiple related yet dissociable causal roles of the right FEF during optokinetic stimulation.