The vascular side of Alzheimer's disease. 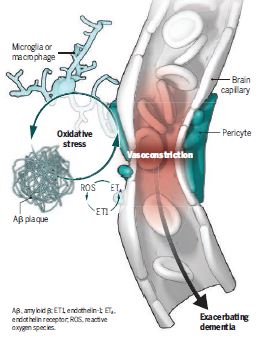 Alzheimer's disease (AD) is largely considered to be caused by aberrant amyloid β (Aβ) protein accumulation in the brain. Despite the current focus on Aβ (1), multiple lines of evidence indicate an important vascular contribution to AD. Aβ accumulation induces neurovascular dysfunction, which results in morphological as well as functional changes of the microvasculature, such as an impaired reactivity of capillaries in response to neuronal activity. Yet the mechanisms of these associations are largely unclear. On page 250 of this issue, Nortley et al. (2) demonstrate that pericytes—contractile cells that wrap around the endothelial cells of capillaries—link Aβ to vascular dysfunction in AD. This suggests pericyte-driven mechanisms as new avenues of therapeutic approaches for AD.