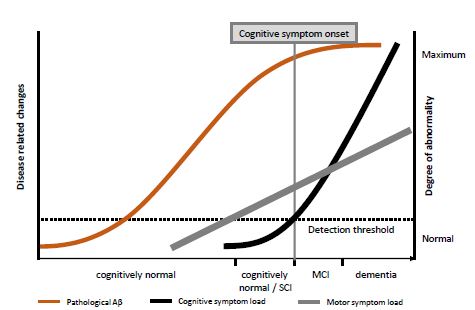 Alzheimer disease (AD) is a neurodegenerative disease characterized by deposition of pathologically aggregated amyloid-β in the extracellular space and pathologically aggregated tau protein in the intracellular space. Mainly affected brain areas are the temporal and the parietal lobe, which cause the classical AD phenotype consisting of increasing forgetfulness and difficulties to orientate. However, AD pathology is not restricted to these brain areas and spreads through the brain as the disease progresses, which can lead to a number of additional symptoms and to atypical presentations. Motor symptoms in AD are the topic of this chapter. Even though motor symptoms are usually not severe and seldomly treated, motor symptoms are quite frequent and can be observed in the majority of AD cases. Motor symptoms are especially frequent in cases with early onset and long disease duration, for example in Apolipoprotein E e4 carriers and in familial early onset AD. In severe cases treatment with pharmacological approaches might be considered. However, treatment strategies largely rely on expert opinions. Due to potential positive impact on prognosis non-pharmacological treatment and exercise might be considered in less advanced cases.