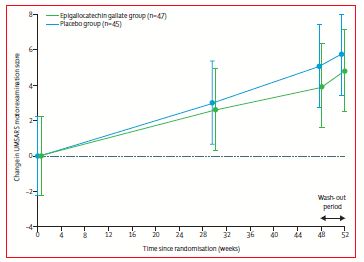 METHODS We did a randomised, double-blind, parallel group, placebo-controlled clinical trial at 12 specialist centres in Germany. Eligible participants were older than 30 years; met consensus criteria for possible or probable multiple system atrophy and could ambulate independently (ie, were at Hoehn and Yahr stages 1–3); and were on stable anti-Parkinson's, anti-dysautonomia, anti-dementia, and anti-depressant regimens (if necessary) for at least 1 month. Participants were randomly assigned (1:1) to epigallocatechin gallate or placebo (mannitol) via a web-generated permuted blockwise randomisation list (block size=2) that was stratified by disease subtype (parkinsonism-predominant disease vs cerebellar-ataxia-predominant disease). All participants and study personnel were masked to treatment assignment. Participants were given one hard gelatin capsule (containing either 400 mg epigallocatechin gallate or mannitol) orally once daily for 4 weeks, then one capsule twice daily for 4 weeks, and then one capsule three times daily for 40 weeks. After 48 weeks, all patients underwent a 4-week wash-out period. The primary endpoint was change in motor examination score of the Unified Multiple System Atrophy Rating Scale (UMSARS) from baseline to 52 weeks. Efficacy analyses were done in all people who received at least one dose of study medication. Safety was analysed in all people who received at least one dose of the study medication to which they had been randomly assigned. This trial is registered with ClinicalTrials.gov ( NCT02008721) and EudraCT (2012-000928-18), and is completed.