Safety and efficacy of deferiprone for pantothenate kinase-associated neurodegeneration: a randomised, double-blind, controlled trial and an open-label extension study. 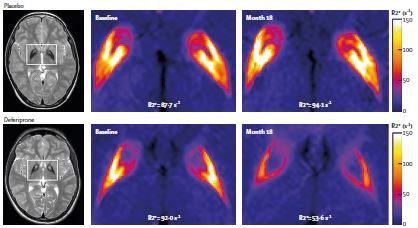 METHODS We did an 18-month, randomised, double-blind, placebo-controlled trial (TIRCON2012V1), followed by a pre-planned 18-month, open-label extension study, in patients with PKAN in four hospitals in Germany, Italy, England, and the USA. Patients aged 4 years or older with a genetically confirmed diagnosis of PKAN, a total score of at least 3 points on the Barry-Albright Dystonia (BAD) scale, and no evidence of iron deficiency, neutropenia, or abnormal hepatic or renal function, were randomly allocated (2:1) to receive an oral solution of either deferiprone (30 mg/kg per day divided into two equal doses) or placebo for 18 months. Randomisation was done with a centralised computer random number generator and with stratification based on age group at onset of symptoms. Patients were allocated to groups by a randomisation team not masked for study intervention that was independent of the study. Patients, caregivers, and investigators were masked to treatment allocation. Co-primary endpoints were the change from baseline to month 18 in the total score on the BAD scale (which measures severity of dystonia in eight body regions) and the score at month 18 on the Patient Global Impression of Improvement (PGI-I) scale, which is a patient-reported interpretation of symptom improvement. Efficacy analyses were done on all patients who received at least one dose of the study drug and who provided a baseline and at least one post-baseline efficacy assessment. Safety analyses were done for all patients who received at least one dose of the study drug. Patients who completed the randomised trial were eligible to enrol in a single-arm, open-label extension study of another 18 months, in which all participants received deferiprone with the same regimen as the main study. The trial was registered on ClinicalTrials.gov, number NCT01741532, and EudraCT, number 2012-000845-11.

INTERPRETATION Deferiprone was well tolerated, achieved target engagement (lowering of iron in the basal ganglia), and seemed to somewhat slow disease progression at 18 months, although not significantly, as assessed by the BAD scale. These findings were corroborated by the results of an additional 18 months of treatment in the extension study. The subjective PGI-I scale was largely unchanged during both study periods, indicating that might not be an adequate tool for assessment of disease progression in patients with PKAN. Our trial provides the first indication of a decrease in disease progression in patients with neurodegeneration with brain iron accumulation. The extensive information collected and long follow-up of patients in the trial will improve the definition of appropriate endpoints, increase the understanding of the natural history, and thus help to shape the design of future trials in this ultra-orphan disease.