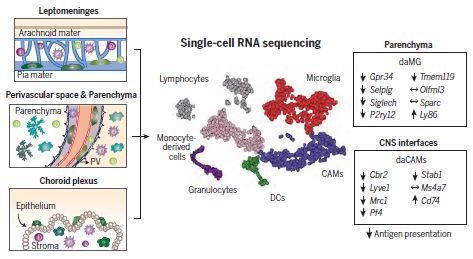 RATIONALE An important step for the initiation of EAE and multiple sclerosis (MS) is the infiltration of the CNS by encephalitogenic T cells, which potentially become reactivated by encountering their self-cognate antigens presented at the brain interfaces. Myeloid cells have been shown to play a critical role in antigen presentation. Consequently, their transcriptomic profile and dynamics during neuroinflammation are crucial for understanding neuroinflammatory pathology.

RESULTS High-throughput single-cell sequencing (scRNA-seq) of CD45+ cells isolated from several CNS compartments (including leptomeninges, perivascular space and parenchyma, and choroid plexus) allowed us to assemble a transcriptional atlas comprising 3461 immune cells, identified as homeostatic (“h”) or disease-associated (“da”) myeloid subsets. Profiling of all CAMs unraveled a core signature that consists of Mrc1, Pf4, Ms4a7, Stab1, and Cbr2. During disease, only Ms4a7 remained stably expressed, and a strong increase of antigen-presentation molecules (such as Cd74) was observed. Microglia expressed genes that included P2ry12, Tmem119, Sparc, and Olfml3. Although most of the core genes were down-regulated during disease, Sparc and Olfml3 expression remained unaltered and were accompanied by an up-regulation of Ly86. Several monocyte populations were observed during EAE, including monocyte-derived cells expressing Mertk and Mrc1 or expressing Zbtb46 and Cd209a. Although DCs were scarce in the homeostatic CNS, their density highly increased during disease, and diverse disease-associated DCs could be identified.

We then investigated the capacity of resident and hematopoietic stem cell–derived myeloid cells for antigen presentation. Time-lapse imaging of Cx3cr1CreERT2:R26tdTomato:Cd2GFP and Ccr2RFP: Cd2GFP mice showed prolonged T cell interactions with circulating myeloid cells rather than tissue-resident macrophages during neuroinflammation. Accordingly, MOG35-55 immunization of Cx3cr1CreERT2:H2-Ab1flox mice showed no overt changes in disease development, indicating that resident macrophages are redundant for antigen presentation. By contrast, Cd11cCre:H2-Ab1flox mice were highly resistant to EAE, pointing to the potential role of DCs and monocyte-derived cells in EAE onset.

CONCLUSION In this study, we unraveled the complexity of the CNS myeloid landscape and the dynamics of several myeloid populations during neuroinflammation. Although CNS-resident macrophages quickly generated context-dependent subsets during disease, their role as APCs was irrelevant for the initiation of pathology. DCs and monocyte-derived cells, highly diverse during EAE, remain the major players in antigen presentation. The comprehensive characterization presented here will provide a strong basis for their future targeting.