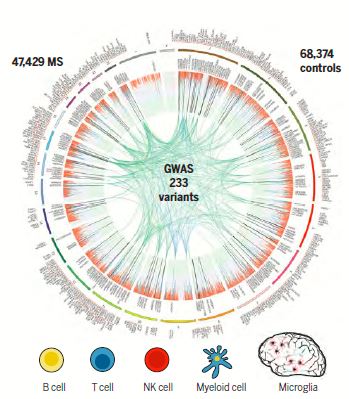 INTRODUCTION Multiple sclerosis (MS) is an inflammatory and degenerative disease of the central nervous system (CNS) that often presents in young adults. Over the past decade, certain elements of the genetic architecture of susceptibility have gradually emerged, but most of the genetic risk for MS remained unknown.

RATIONALE Earlier versions of the MS genetic map had highlighted the role of the adaptive arm of the immune system, implicating multiple different T cell subsets. We expanded our knowledge of MS susceptibility by performing a genetic association study in MS that leveraged genotype data from 47,429 MS cases and 68,374 control subjects. We enhanced this analysis with an in-depth and comprehensive evaluation of the functional impact of the susceptibility variants that we uncovered.

RESULTS We identified 233 statistically independent associations with MS susceptibility that are genome-wide significant. The major histocompatibility complex (MHC) contains 32 of these associations, and one, the first MS locus on a sex chromosome, is found in chromosome X. The remaining 200 associations are found in the autosomal non-MHC genome. Our genome-wide partitioning approach and large-scale replication effort allowed the evaluation of other variants that did not meet our strict threshold of significance, such as 416 variants that had evidence of statistical replication but did not reach the level of genome-wide statistical significance. Many of these loci are likely to be true susceptibility loci. The genome-wide and suggestive effects jointly explain ~48% of the estimated heritability for MS.

Using atlases of gene expression patterns and epigenomic features, we documented that enrichment for MS susceptibility loci was apparent in many different immune cell types and tissues, whereas there was an absence of enrichment in tissue-level brain profiles. We extended the annotation analyses by analyzing new data generated from human induced pluripotent stem cell–derived neurons as well as from purified primary human astrocytes and microglia, observing that enrichment for MS genes is seen in human microglia, the resident immune cells of the brain, but not in astrocytes or neurons. Further, we have characterized the functional consequences of many MS susceptibility variants by identifying those that influence the expression of nearby genes in immune cells or brain. Last, we applied an ensemble of methods to prioritize 551 putative MS susceptibility genes that may be the target of the MS variants that meet a threshold of genome-wide significance. This extensive list of MS susceptibility genes expands our knowledge more than twofold and highlights processes relating to the development, maturation, and terminal differentiation of B, T, natural killer, and myeloid cells that may contribute to the onset of MS. These analyses focus our attention on a number of different cells in which the function of MS variants should be further investigated.

Using reference protein-protein interaction maps, these MS genes can also be assembled into 13 communities of genes encoding proteins that interact with one another; this higher-order architecture begins to assemble groups of susceptibility variants whose functional consequences may converge on certain protein complexes that can be prioritized for further evaluation as targets for MS prevention strategies.

CONCLUSION We report a detailed genetic and genomic map of MS susceptibility, one that explains almost half of this disease’s heritability. We highlight the importance of several cells of the peripheral and brain resident immune systems—implicating both the adaptive and innate arms—in the translation of MS genetic risk into an auto-immune inflammatory process that targets the CNS and triggers a neurodegenerative cascade. In particular, the myeloid component highlights a possible role for microglia that requires further investigation, and the B cell component connects to the narrative of effective B cell–directed therapies in MS. These insights set the stage for a new generation of functional studies to uncover the sequence of molecular events that lead to disease onset. This perspective on the trajectory of disease onset will lay the foundation for developing primary prevention strategies that mitigate the risk of developing MS.