Addressing a real life problem: treatment with intravenous thrombolysis and mechanical thrombectomy in acute stroke patients with an extended time window beyond 4.5 hours based on computed tomography perfusion imaging. 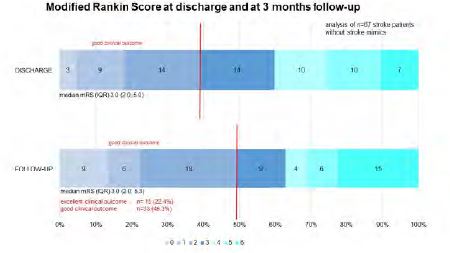 BACKGROUND Acute ischemic stroke treatment with intravenous thrombolysis(IVT) is restricted to a time window of 4.5 hours after known or presumed onset. Recently, MRI‐guided treatment decision in wake‐up stroke(WUS) was shown to be effective. The aim of this study was to determine the safety and outcome of IVT in patients with a time window beyond 4.5 hours selected by computed tomography perfusion(CTP) imaging.

METHODS We analyzed all consecutive patients last seen well beyond 4.5 hours after stroke onset treated with IVT based on CTP between 01/2015‐10/2018. CTP was visually assessed to estimate the mismatch between cerebral blood flow and cerebral blood volume maps. Early infarct signs were documented according to Alberta Stroke Program Early CT Score (ASPECTS). Safety data were obtained for mortality and symptomatic intracerebral hemorrhage(sICH). Follow‐up was assessed with the modified Rankin scale(mRS).

CONCLUSION In patients presenting in an extended time window beyond 4.5 hours, IVT‐treatment with decision‐making based on CTP might be a safe procedure. Further evaluation in clinical trials is needed.