Prognostic factors in ALS: a comparison between Germany and China. 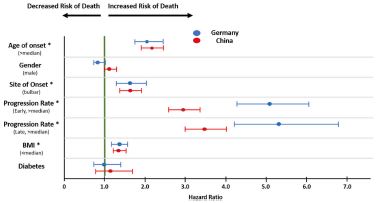 OBJECTIVE Several independent prognostic factors, such as age of onset, type of onset, body mass index (BMI), and progression rate have been identified for amyotrophic lateral sclerosis (ALS) in Caucasians. The aim of this study was to identify such factors in Chinese patients and to compare their impact with German patients.

METHODS Comparison of prognostic factors was based on two hospital-based registries. The registry of the German Network for Motor Neuron Diseases contains 3100 patients with ALS. The Chinese registry comprises 2101 patients who were collected between 2003 and 2015 in the metropolitan area of Beijing.

INTERPRETATION Prognostic factors, which are known to modify the course of disease in Caucasians, apply to Chinese patients as well. The results indicate that despite the apparent differences regarding genotype and clinical phenotype, findings from interventional studies in Caucasians aiming at disease-modifying prognostic factors (such as body weight) may be transferred to Chinese patients.