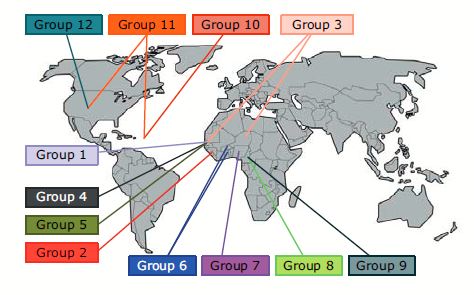 Due to its long genetic evolutionary history, Africans exhibit more genetic variation than any other population in the world. Their genetic diversity further lends itself to subdivisions of Africans into groups of individuals with a genetic similarity of varying degrees of granularity. It remains challenging to detect fine-scale structure in a computationally efficient and meaningful way. In this paper, we present a proof-of-concept of a novel fine-scale population structure detection tool with Western African samples. These samples consist of 1396 individuals from 25 ethnic groups (two groups are African American descendants). The strategy is based on a recently developed tool called IPCAPS. IPCAPS, or Iterative Pruning to CApture Population Structure, is a genetic divisive clustering strategy that enhances iterative pruning PCA, is robust to outliers and does not require a priori computation of haplotypes. Our strategy identified in total 12 groups and 6 groups were revealed as fine-scale structure detected in the samples from Cameroon, Gambia, Mali, Southwest USA, and Barbados. Our finding helped to explain evolutionary processes in the analyzed West African samples and raise awareness for fine-scale structure resolution when conducting genome-wide association and interaction studies.