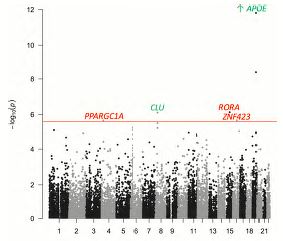 Late onset Alzheimer's disease is the most common form of dementia for which about 30 susceptibility loci have been reported. The aim of the current study is to identify novel genes associated with Alzheimer's disease using the largest up-to-date reference single nucleotide polymorphism (SNP) panel, the most accurate imputation software and a novel gene-based analysis approach which tests for patterns of association within genes, in the powerful genome-wide association dataset of the International Genomics of Alzheimer's Project Consortium, comprising over 7 million genotypes from 17,008 Alzheimer's cases and 37,154 controls. In addition to earlier reported genes, we detected three novel gene-wide significant loci PPARGC1A (p = 2.2 × 10-6), RORA (p = 7.4 × 10-7) and ZNF423 (p = 2.1 × 10-6). PPARGC1A and RORA are involved in circadian rhythm; circadian disturbances are one of the earliest symptoms of Alzheimer's disease. PPARGC1A is additionally linked to energy metabolism and the generation of amyloid beta plaques. RORA is involved in a variety of functions apart from circadian rhythm, such as cholesterol metabolism and inflammation. The ZNF423 gene resides in an Alzheimer's disease-specific protein network and is likely involved with centrosomes and DNA damage repair.