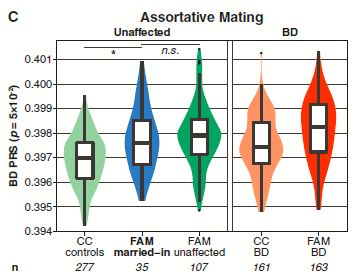 Multiplex families with a high prevalence of a psychiatric disorder are often examined to identify rare genetic variants with large effect sizes. In the present study, we analysed whether the risk for bipolar disorder (BD) in BD multiplex families is influenced by common genetic variants. Furthermore, we investigated whether this risk is conferred mainly by BD-specific risk variants or by variants also associated with the susceptibility to schizophrenia or major depression. In total, 395 individuals from 33 Andalusian BD multiplex families (166 BD, 78 major depressive disorder, 151 unaffected) as well as 438 subjects from an independent, BD case/control cohort (161 unrelated BD, 277 unrelated controls) were analysed. Polygenic risk scores (PRS) for BD, schizophrenia (SCZ), and major depression were calculated and compared between the cohorts. Both the familial BD cases and unaffected family members had higher PRS for all three psychiatric disorders than the independent controls, with BD and SCZ being significant after correction for multiple testing, suggesting a high baseline risk for several psychiatric disorders in the families. Moreover, familial BD cases showed significantly higher BD PRS than unaffected family members and unrelated BD cases. A plausible hypothesis is that, in multiplex families with a general increase in risk for psychiatric disease, BD development is attributable to a high burden of common variants that confer a specific risk for BD. The present analyses demonstrated that common genetic risk variants for psychiatric disorders are likely to contribute to the high incidence of affective psychiatric disorders in the multiplex families. However, the PRS explained only part of the observed phenotypic variance, and rare variants might have also contributed to disease development.