Hypertonic Stress Causes Cytoplasmic Translocation of Neuronal, but Not Astrocytic, FUS due to Impaired Transportin Function. 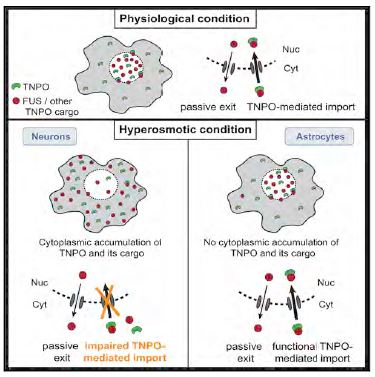 The primarily nuclear RNA-binding protein FUS (fused in sarcoma) forms pathological cytoplasmic inclusions in a subset of early-onset amyotrophic lateral sclerosis (ALS) and frontotemporal dementia (FTD) patients. In response to cellular stress, FUS is recruited to cytoplasmic stress granules, which are hypothesized to act as precursors of pathological inclusions. We monitored the stress-induced nucleocytoplasmic shuttling of endogenous FUS in an ex vivo mouse CNS model and human neural networks. We found that hyperosmolar, but not oxidative, stress induced robust cytoplasmic translocation of neuronal FUS, with transient nuclear clearance and loss of function. Surprisingly, this reaction is independent of stress granule formation and the molecular pathways activated by hyperosmolarity. Instead, it represents a mechanism mediated by cytoplasmic redistribution of Transportin 1/2 and is potentiated by transcriptional inhibition. Importantly, astrocytes, which remain unaffected in ALS/FTD-FUS, are spared from this stress reaction that may signify the initial event in the development of FUS pathology.