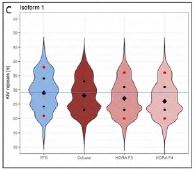 Objective — Lp(a) (lipoprotein[a]) concentrations are widely genetically determined by the LPA isoforms and show ≤5-fold interpopulation differences. Two- to 3-fold differences have been reported even within Europe. Finns represent a distinctive population isolate within Europe and have been repeatedly reported to present lower Lp(a) concentrations than Central Europeans. The significance of this finding was unclear for a long time because of the difficult comparability of Lp(a) assays. Recently, a large standardized study in >50 000 individuals from 7 European populations confirmed this observation but could not provide insights into the causes.

Conclusions — The population differences in Lp(a) concentrations between Finnish and Central European populations originate not only from a different LPA isoform distribution but suggest the existence of novel functional variation in the small-isoform range.