Nuclear egress of TDP-43 and FUS occurs independently of Exportin-1/CRM1. 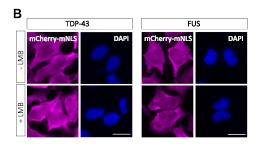 TDP-43 and FUS are nuclear proteins with multiple functions in mRNA processing. They play key roles in ALS (amyotrophic lateral sclerosis) and FTD (frontotemporal dementia), where they are partially lost from the nucleus and aggregate in the cytoplasm of neurons and glial cells. Defects in nucleocytoplasmic transport contribute to this pathology, hence nuclear import of both proteins has been studied in detail. However, their nuclear export routes remain poorly characterized and it is unclear whether aberrant nuclear export contributes to TDP-43 or FUS pathology. Here we show that predicted nuclear export signals in TDP-43 and FUS are non-functional and that both proteins are exported independently of the export receptor CRM1/Exportin-1. Silencing of Exportin-5 or the mRNA export factor Aly/REF, as well as mutations that abrogate RNA-binding do not impair export of TDP-43 and FUS. However, artificially enlarging TDP-43 or FUS impairs their nuclear egress, suggesting that they could leave the nucleus by passive diffusion. Finally, we found that inhibition of transcription causes accelerated nuclear egress of TDP-43, suggesting that newly synthesized RNA retains TDP-43 in the nucleus, limiting its egress into the cytoplasm. Our findings implicate reduced nuclear retention as a possible factor contributing to mislocalization of TDP-43 in ALS/FTD.