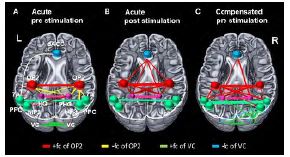 OBJECTIVE: Vestibular signals are involved in higher cortical functions like spatial orientation and its disorders. Vestibular dysfunction contributes, for example, to spatial neglect which can be transiently improved by caloric stimulation. The exact roles and mechanisms of the vestibular and visual systems for the recovery of neglect are not yet known.

METHODS: Resting-state functional connectivity (fc) magnetic resonance imaging was recorded in a patient with hemispatial neglect during the acute phase and after recovery 6 months later following a right middle cerebral artery infarction before and after caloric vestibular stimulation. Seeds in the vestibular [parietal operculum (OP2)], the parietal [posterior parietal cortex (PPC); 7A, hIP3], and the visual cortex (VC) were used for the analysis.

RESULTS: During the acute stage after caloric stimulation the fc of the right OP2 to the left OP2, the anterior cingulum, and the para/hippocampus was increased bilaterally (i.e., the vestibular network), while the interhemispheric fc was reduced between homologous regions in the VC. After 6 months, similar fc increases in the vestibular network were found without stimulation. In addition, fc increases of the OP2 to the PPC and the VC were seen; interhemispherically this was true for both PPCs and for the right PPC to both VCs.

CONCLUSION: Improvement of neglect after caloric stimulation in the acute phase was associated with increased fc of vestibular cortex areas in both hemispheres to the para-hippocampus and the dorsal anterior cingulum, but simultaneously with reduced interhemispheric VC connectivity. This disclosed a, to some extent, similar but also distinct short-term mechanism (vestibular stimulation) of an improvement of spatial orientation compared to the long-term recovery of neglect.