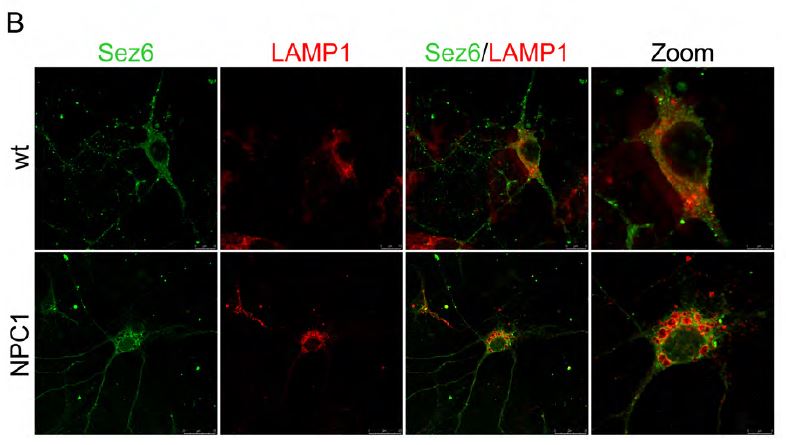 It is intriguing that a rare, inherited lysosomal storage disorder Niemann-Pick type C (NPC) shares similarities with Alzheimer's disease (AD). We have previously reported an enhanced processing of β-amyloid precursor protein (APP) by β-secretase (BACE1), a key enzyme in the pathogenesis of AD, in NPC1-null cells. In this work, we characterized regional and temporal expression and processing of the recently identified BACE1 substrates seizure protein 6 (Sez6) and seizure 6-like protein (Sez6L), and APP, in NPC1-/- (NPC1) and NPC1+/+ (wt) mouse brains. We analysed 4-weeks old brains to detect the earliest changes associated with NPC, and 10-weeks of age to identify changes at terminal disease stage. Sez6 and Sez6L were selected due to their predominant cleavage by BACE1, and their potential role in synaptic function that may contribute to presentation of seizures and/or motor impairments in NPC patients. While an enhanced BACE1-cleavage of all three substrates was detected in NPC1 vs. wt-mouse brains at 4-weeks of age, at 10-weeks increased proteolysis by BACE1 was observed for Sez6L in the cortex, hippocampus and cerebellum of NPC1-mice. Interestingly, both APP and Sez6L were found to be expressed in Purkinje neurons and their immunostaining was lost upon Purkinje cell neurodegeneration in 10-weeks old NPC1 mice. Furthermore, in NPC1- vs. wt-mouse primary cortical neurons, both Sez6 and Sez6L showed increased punctuate staining within the endolysosomal pathway as well as increased Sez6L and BACE1-positive puncta. This indicates that a trafficking defect within the endolysosomal pathway may play a key role in enhanced BACE1-proteolysis in NPC disease. Overall, our findings suggest that enhanced proteolysis by BACE1 could be a part of NPC disease pathogenesis. Understanding the basic biology of BACE1 and the functional impact of cleavage of its substrates is important to better evaluate the therapeutic potential of BACE1 against AD and, possibly, NPC disease.