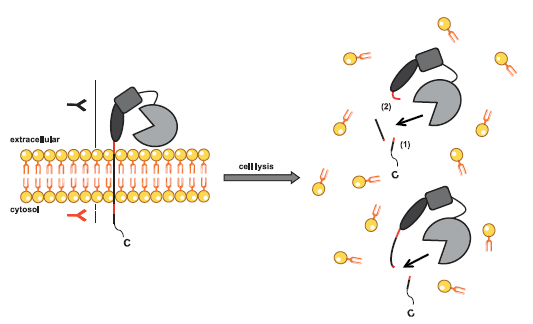 The transmembrane protein, ADAM10 (a disintegrin and metalloprotease 10), has key physiologic functions-for example, during embryonic development and in the brain. During transit through the secretory pathway, immature ADAM10 (proADAM10) is converted into its proteolytically active, mature form (mADAM10). Increasing or decreasing the abundance and/or activity of mADAM10 is considered to be a therapeutic approach for the treatment of such diseases as Alzheimer's disease and cancer. Yet biochemical detection and characterization of mADAM10 has been difficult. In contrast, proADAM10 is readily detected-for example, in immunoblots-which suggests that mADAM10 is only a fraction of total cellular ADAM10. Here, we demonstrate that mADAM10, but not proADAM10, unexpectedly undergoes rapid, time-dependent degradation upon biochemical cell lysis in different cell lines and in primary neurons, which prevents the detection of the majority of mADAM10 in immunoblots. This degradation required the catalytic activity of ADAM10, was efficiently prevented by adding active site inhibitors to the lysis buffer, and did not affect proADAM10, which suggests that ADAM10 degradation occurred in an intramolecular and autoproteolytic manner. Inhibition of postlysis autoproteolysis demonstrated efficient cellular ADAM10 maturation with higher levels of mADAM10 than proADAM10. Moreover, a cycloheximide chase experiment revealed that mADAM10 is a long-lived protein with a half-life of approximately 12 h. In summary, our study demonstrates that mADAM10 autoproteolysis must be blocked to allow for the proper detection of mADAM10, which is essential for the correct interpretation of biochemical and cellular studies of ADAM10.-Brummer, T., Pigoni, M., Rossello, A., Wang, H., Noy, P. J., Tomlinson, M. G., Blobel, C. P., Lichtenthaler, S. F. The metalloprotease ADAM10 (a disintegrin and metalloprotease 10) undergoes rapid, postlysis autocatalytic degradation.