Evidence for Myelin Sheath Remodeling in the CNS Revealed by In Vivo Imaging. 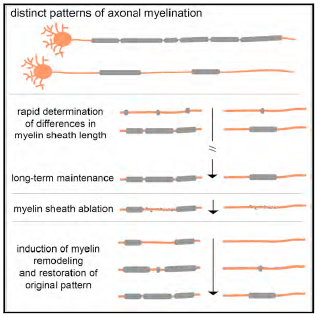 The length of myelin sheaths affects conduction speed along axons and information propagation. It has recently become clear that myelin may be adaptively modified to modulate circuit function, implying that length remodeling of myelin sheaths should occur. However, direct evidence for such events is lacking. We have investigated how myelination patterns are formed, maintained, and remodeled using long-term imaging and myelin ablation in zebrafish. We demonstrate that length differences between myelin sheaths are established by rapid and variable growth within 3 days after their formation, independently of their time of formation, and even along discontinuously myelinated axons. Afterward, sheaths continue extending at similar rates to compensate for overall animal growth. In consequence, once axon myelination patterns are established, they are maintained over long periods of time. We tested whether mature myelin sheaths can remodel by removing individual sheaths from single axons by targeted ablation. Remarkably, extensive changes in sheath length and number occurred, which frequently restored the original myelination pattern. Our results show that axons can control myelin growth and remodeling, and we provide evidence for a homeostatic control of axon myelination patterns by maintenance and remodeling of myelin sheath length, with implications for circuit development, function, and repair.