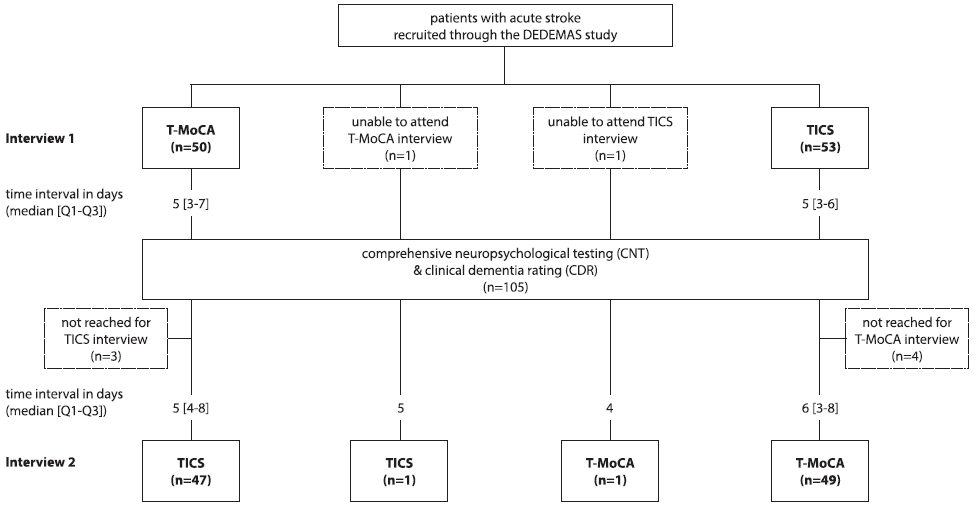 BACKGROUND AND PURPOSE:
Assessment of cognitive status poststroke is recommended by guidelines but follow-up can often not be done in person. The Telephone Interview of Cognitive Status (TICS) and the Telephone Montreal Cognitive Assessment (T-MoCA) are considered useful screening instruments. Yet, evidence to define optimal cut-offs for mild cognitive impairment (MCI) after stroke is limited.

METHODS:
We studied 105 patients enrolled in the prospective DEDEMAS study (Determinants of Dementia After Stroke; NCT01334749). Follow-up visits at 6, 12, 36, and 60 months included comprehensive neuropsychological testing and the Clinical Dementia Rating scale, both of which served as reference standards. The original TICS and T-MoCA were obtained in 2 separate telephone interviews each separated from the personal visits by 1 week (1 before and 1 after the visit) with the order of interviews (TICS versus T-MoCA) alternating between subjects. Area under the receiver-operating characteristic curves was determined.

RESULTS:
Ninety-six patients completed both the face-to-face visits and the 2 interviews. Area under the receiver-operating characteristic curves ranged between 0.76 and 0.83 for TICS and between 0.73 and 0.94 for T-MoCA depending on MCI definition. For multidomain MCI defined by multiple-tests definition derived from comprehensive neuropsychological testing optimal sensitivities and specificities were achieved at cut-offs <36 (TICS) and <18 (T-MoCA). Validity was lower using single-test definition, and cut-offs were higher compared with multiple-test definitions. Using Clinical Dementia Rating as the reference, optimal cut-offs for MCI were <36 (TICS) and approximately 19 (T-MoCA).