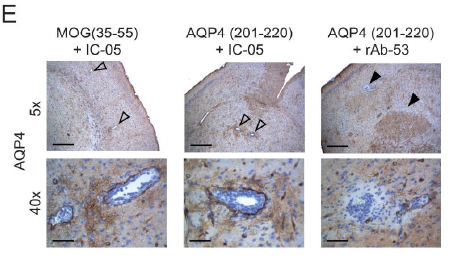 Neuromyelitis optica (NMO) is an autoimmune disorder of the central nervous system (CNS) mediated by antibodies to water channel protein AQP4 expressed in astrocytes. The contribution of AQP4-specific T cells to the class switch recombination of pathogenic AQP4-specific antibodies and to the inflammation of the blood-brain-barrier is incompletely understood, as immunogenic naturally processed T-cell epitopes of AQP4 are unknown. By immunizing Aqp4−/− mice with full length murine AQP4 protein followed by recall with overlapping peptides, we here identify AQP4(201-220) as the major immunogenic IAb-restricted epitope of AQP4. We show that wild type mice do not harbor AQP4(201-220)-specific T-cell clones in their natural repertoire due to deletional tolerance. However, immunization with AQP4(201-220) of Rag1−/− mice reconstituted with the mature T-cell repertoire of Aqp4−/− mice elicits an encephalomyelitic syndrome. Similarly to the T-cell repertoire, the B-cell repertoire of wild type mice is "purged" of AQP4-specific B cells, and robust serum responses to AQP4 are only mounted in Aqp4−/− mice. While AQP4(201-220)-specific T cells alone induce encephalomyelitis, NMO-specific lesional patterns in the CNS and in the retina only occur in the additional presence of anti-AQP4 antibodies. Thus, failure of deletional T-cell and B-cell tolerance against AQP4 is a prerequisite for clinically manifest NMO.