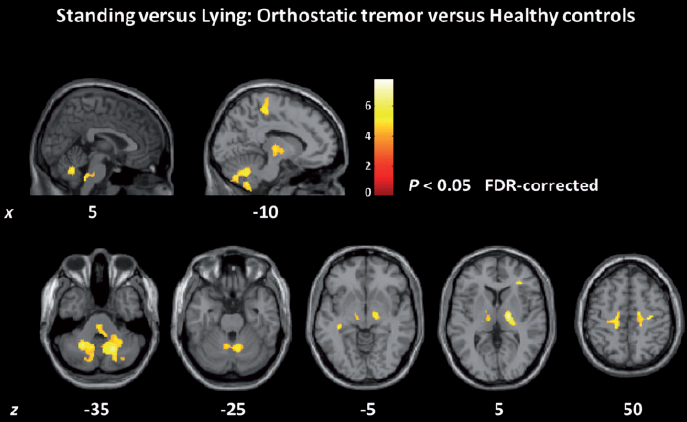 Primary orthostatic tremor is a rare neurological disease characterized mainly by a high frequency tremor of the legs while standing. The aim of this study was to identify the common core structures of the oscillatory circuit in orthostatic tremor and how it is modulated by changes of body position. Ten patients with orthostatic tremor and 10 healthy age-matched control subjects underwent a standardized neurological and neuro-ophthalmological examination including electromyographic and posturographic recordings. Task-dependent changes of cerebral glucose metabolism during lying and standing were measured in all subjects by sequential 18F-fluorodeoxyglucose-positron emission tomography on separate days. Results were compared between groups and conditions. All the orthostatic tremor patients, but no control subject, showed the characteristic 13–18 Hz tremor in coherent muscles during standing, which ceased in the supine position. While lying, patients had a significantly increased regional cerebral glucose metabolism in the pontine tegmentum, the posterior cerebellum (including the dentate nuclei), the ventral intermediate and ventral posterolateral nucleus of the thalamus, and the primary motor cortex bilaterally compared to controls. Similar glucose metabolism changes occurred with clinical manifestation of the tremor during standing. The glucose metabolism was relatively decreased in mesiofrontal cortical areas (i.e. the medial prefrontal cortex, supplementary motor area and anterior cingulate cortex) and the bilateral anterior insula in orthostatic tremor patients while lying and standing. The mesiofrontal hypometabolism correlated with increased body sway in posturography. This study confirms and further elucidates ponto-cerebello-thalamo-primary motor cortical activations underlying primary orthostatic tremor, which presented consistently in a group of patients. Compared to other tremor disorders one characteristic feature in orthostatic tremor seems to be the involvement of the pontine tegmentum in the pathophysiology of tremor generation. High frequency oscillatory properties of pontine tegmental neurons have been reported in pathological oscillatory eye movements. It is remarkable that the characteristic activation and deactivation pattern in orthostatic tremor is already present in the supine position without tremor presentation. Multilevel changes of neuronal excitability during upright stance may trigger activation of the orthostatic tremor network. Based on the functional imaging data described in this study, it is hypothesized that a mesiofrontal deactivation is another characteristic feature of orthostatic tremor and plays a pivotal role in development of postural unsteadiness during prolonged standing.