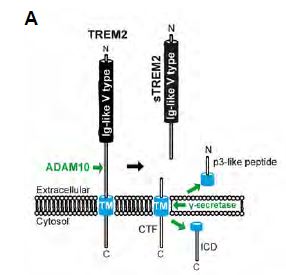 Sequence variations occurring in the gene encoding the triggering receptor expressed on myeloid cells 2 (TREM2) support an essential function of microglia and innate immunity in the pathogenesis of Alzheimer’s disease (AD) and other neurodegenerative disorders. TREM2 matures within the secretory pathway, and its ectodomain is shed on the plasma membrane. Missense mutations in the immunoglobulin (Ig)-like domain such as p.T66M and p.Y38C retain TREM2 within the endoplasmic reticulum and reduce shedding as well as TREM2-dependent phagocytosis. Using mass spectrometry, we have now determined the cleavage site of TREM2. TREM2 is shed by proteases of the ADAM (a disintegrin and metalloproteinase domain containing protein) family C-terminal to histidine 157, a position where an AD-associated coding variant has been discovered (p.H157Y) in the Han Chinese population. Opposite to the characterized mutations within the Ig-like domain, such as p.T66M and p.Y38C, the p.H157Y variant within the stalk region leads to enhanced shedding of TREM2. Elevated ectodomain shedding reduces cell surface full-length TREM2 and lowers TREM2-dependent phagocytosis. Therefore, two seemingly opposite cellular effects of TREM2 variants, namely reduced versus enhanced shedding, result in similar phenotypic outcomes by reducing cell surface TREM2.