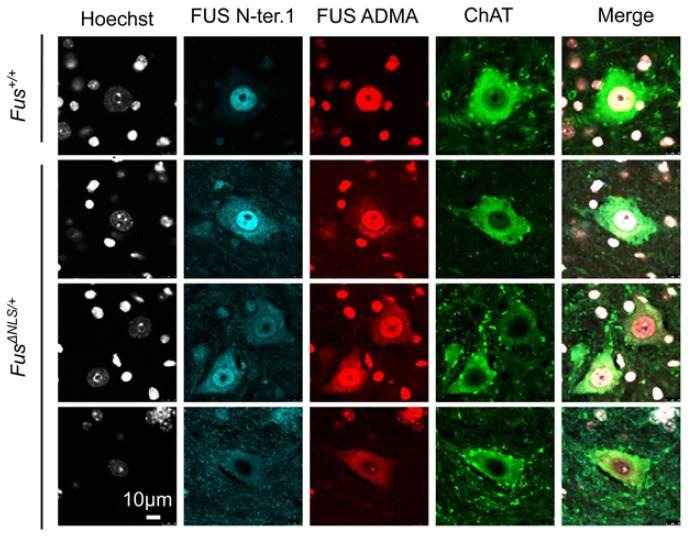 Motor neuron-extrinsic mechanisms have been shown to participate in the pathogenesis of ALS-SOD1, one familial form of amyotrophic lateral sclerosis (ALS). It remains unclear whether such mechanisms contribute to other familial forms, such as TDP-43 and FUS-associated ALS. Here, we characterize a single-copy mouse model of ALS-FUS that conditionally expresses a disease-relevant truncating FUS mutant from the endogenous murine Fus gene. We show that these mice, but not mice heterozygous for a Fus null allele, develop similar pathology as ALS-FUS patients and a mild motor neuron phenotype. Most importantly, CRE-mediated rescue of the Fus mutation within motor neurons prevented degeneration of motor neuron cell bodies, but only delayed appearance of motor symptoms. Indeed, we observed downregulation of multiple myelin-related genes, and increased numbers of oligodendrocytes in the spinal cord supporting their contribution to behavioral deficits. In all, we show that mutant FUS triggers toxic events in both motor neurons and neighboring cells to elicit motor neuron disease.