Sleep disturbance by pramipexole is modified by Meis1 in mice 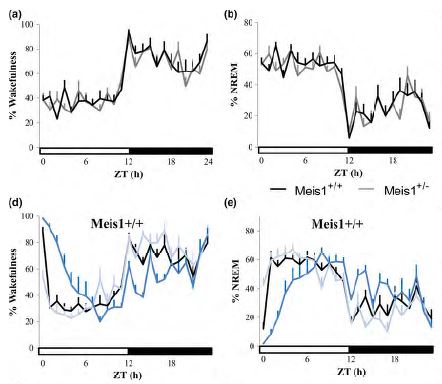 Meis homeobox 1 (Meis1) is a transcription factor functioning in the development of the nervous system and the cardiovascular system. Both common and rare variants within the gene have been associated with restless legs syndrome (RLS), while its association with symptoms of insomnia has also been discovered recently. RLS is associated with sleep disturbances, and while Meis1 haploinsufficiency is one of the most promising strategies for an RLS animal model, sleep phenotyping of Meis1 knockout mice has never been conducted. We report a detailed sleep analysis of heterozygous Meis1 knockout mice and challenge it with pramipexole, a dopamine agonist used in the treatment of RLS. At baseline, the Meis1-haploinsufficient mice had a trend towards lower delta power in the electroencephalogram (EEG) during sleep compared to the wild-type littermates, possibly indicating reduced sleep quality, but not sleep fragmentation. Pramipexole had a sleep disrupting effect in both genotype groups. In addition, it exerted differential effects on the EEG power spectra of the two mouse lines, remarkably elevating the theta power of the mutant mice during recovery more than that of the wild-types. In conclusion, Meis1 haploinsufficiency seems to have only a modest effect on sleep, but the gene may interact with the sleep-disrupting effect of dopamine agonists.