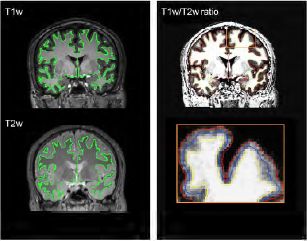 Objective In multiple sclerosis, neuropathological studies have shown widespread changes in the cerebral cortex. In vivo imaging is critical since the histopathological substrate of most measurements is unknown. Method Using a novel MRI analysis technique, based on the ratio of T1- and T2-weighted signal intensities, we studied the cerebral cortex of a large cohort of patients in early stages of multiple sclerosis. 168 patients with clinically isolated syndrome or relapsing-remitting multiple sclerosis (Expanded Disability Status Scale: median, 1; range, 0-3.5) and 80 age- and sex-matched healthy controls were investigated. We also searched for the histopathological substrate of the T1/T2-weighted ratio by combining post mortem imaging and histopathology in 9 multiple sclerosis brain donors. Results Patients showed lower T1/T2-weighted ratio values in parietal and occipital areas. The four most significant clusters appeared in the medial occipital and posterior cingulate cortex (each left and right). The decrease of the T1/T2-weighted ratio in the posterior cingulate was related to performance in attention. Analysis of the T1/T2-weighted ratio values of post mortem imaging yielded a strong correlation with dendrite density but none of the other parameters including myelin. Interpretation The T1/T2-weighted ratio decreases in early stages of multiple sclerosis in a widespread manner with a preponderance of posterior areas and with a contribution to attentional performance; it seems to reflect dendrite pathology. As the method is broadly available and applicable to (available) clinical scans, we believe that it is a promising candidate for studying and monitoring cortical pathology or therapeutic effects in multiple sclerosis. This article is protected by copyright. All rights reserved.