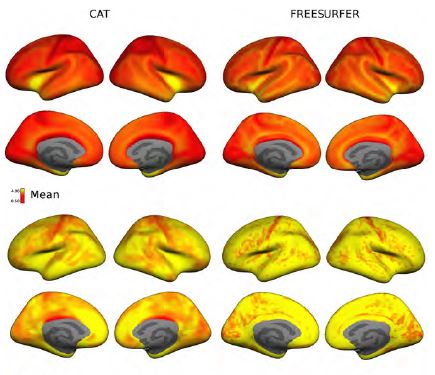 The cerebral cortex is a highly folded outer layer of grey matter tissue that plays a key role in cognitive functions. In part, alterations of the cortex during development and disease can be captured by measuring the cortical thickness across the whole brain. Available software tools differ with regard to labor intensity and computational demands. In this study, we compared the computational anatomy toolbox (CAT), a recently proposed volume-based tool, with the well-established surface-based tool FreeSurfer. We observed that overall thickness measures were highly inter-correlated, although thickness estimates were systematically lower in CAT than in FreeSurfer. Comparison of multiple sclerosis (MS) patients with agematched healthy control subjects showed highly comparable clusters of MS-related thinning for both methods. Likewise, both methods yielded comparable clusters of age-related cortical thinning, although correlations between age and average cortical thickness were stronger for FreeSurfer. Our data suggest that, for the analysis of cortical thickness, the volumebased CAT tool can be regarded a considerable alternative to the well-established surfacebased FreeSurfer tool.